The Blackout from Wales 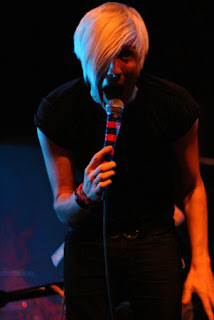 Mannequin Republic again got the chance to interview an awesome band. This time we interviewed a band that will be arriving on our shores next year for Soundwave 2011 in Feb-March.
The Blackout has come a long way since playing heaps of small gigs in South Wales. From regular touring spots with The Lost Prophets and a tonne of festival appearances world-wide, they are certainly on their way to rock stardom. We had a chat to The Blackout’s vocalist Sean Smith and instead of asking him some wanky questions about their last album or their fans or what it’s like to be signed up to Epitaph Records, we showed him some words and he gave his opinion on them.

“Oh i saw a girl with a tattoo on her back once. Shit she should’ve had my bastard kids. I love women with tatts. I love them too. My friend is a tattooer and he told me the worst place to get tattooed is your little toe. So we tattooed each others toes and it’s pretty bad! I’ve got my stomach tattooed and that didn’t really hurt that much.. probably because I was quite chubby back then. I’ve lost some pounds since”

“Um… fuck that shit. Vampires don’t sparkle in the daylight, they die. Well… I don’t really have anything else to say about it.”

M.R: Is it like a Disney Lost Boys type film?

Smith: No, it’s not a Lost Boys, which is one of the best vampire movies of all time, it’s just for fat goth girls (laughs). Which I love but they like Twilight, I just don’t. Are they making another movie?

I love food. It makes me hard just looking at most foods. Sushi is my favourite but because I don’t know where every sushi place is in the world I have to settle for Burger King. So instead of sushi it’s “Chicken Royale” which is known as the “Long Chicken” in Germany.

M.R: Any vegetarians in the band?

Smith: God no. We’re not pussies. But technically a vegan woman does eat meat from time to time. In bed…..usually my bed.

Smith: Are you a vege-bastard?

Well I take drugs everyday. Heroin mainly. And then I take vitamins afterwards to keep my body up with the heroin. Well.. I guess we’re not fully against drugs, I mean heroin and stuff is stupid. However Bob Marley was always pretty happy most of the time (laughs).

Brilliant. The guy who produced our album, Jason, told us a story his friend engineer worked with Michael Jackson and it was before the time where you had autotune and stuff and it was all on tape so you had to go back and record it all rather than record sections and Michael Jackson was always note perfect. And that’s something you will not find anymore because you don’t need to be a perfect singer anymore and I’m definitely one of those people. But yeah, computers can make you sound perfect where back in that time he was just a really good singer and a good songwriter as well.

M.R: What’s your opinion towards all the scandals that surrounded him?
Smith: To me nothing was proved. And yeah, I’m gonna say innocent until proved guilty. Even though he paid money but I think it was just to stop it anyway. Most of it was rumours. I hear rumours about me all the time. 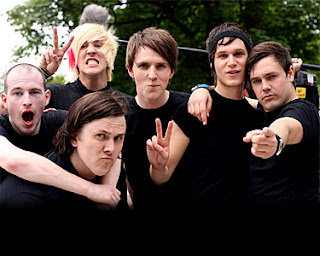 M.R: REally? Which ones?
Smith: They’re not bad….just strange ones.

Funny, there’s a baby’s willy on the cover. I.. um.. I recently thought about them a lot because I thought about how much I love Dave Grohl. And I decided next time I see him I’m going to make an award and give it to him. An award for winning at life! But yeah, I’m not a big fan of being miserable, I think that’s stupid, because I’m always miserable (laughs) but I’d rather listen to music that brings you up than takes you down. It’s like drugs, like uppers and downers. But yeah, I never really got into Nirvana.. I got into metal very early.

(long pause) (sigh) It’s cool, I guess. It’s up to the person so I wouldn’t really judge for or against it. I’ve never been straight edge but I think it’s kind of a close community. Where we come from straight edge never was like a community, it was just a year when everyone was straight edge and then it just faded away. In America it seems to be more popular but in the end it’s a lifestyle choice everyone has to make for themselves. And I’m not for or against it, if you’re straight edge, it’s cool if you’re not, whatever. It’s your choice.

We bring our Xbox with us wherever we go..it’s on the bus now and we play Call Of Duty, Guitar Hero a car game.. we’re all into computer games I guess. I like to play while being on tour, mostly guitar hero and football and stuff. If I would have a Xbox at home I’d play all the time so I keep it for the tour, for the down time.

*Dirty Love (Sean Smith’s side project)
Okay. Um.. don’t know what to say about it. Trying to make a website for it now, I’d like to get more designs together, get it up and running..because not enough people know about it yet, so I’m trying to make it more popular. It’s just going to be T-Shirts and all the designs I come up with and I like and like wearing. Because I’m fed up seeing people’s T-Shirts designs and it’s just something someone knocked up in two minutes, it’s not very good. So basically it’s just stuff that I like, I find funny and I’d wear.

M.R: Are you involved in the designing process for the the Blackout merchandise as well?

Smith: Me and Gavin (vocals) always sum up ideas.. Gavin is like the drawer, we both have ideas but he’s the one that gets on his mac and designs and creates it. So yeah, we do merch for the band.

M.R: Thanks for the chat Sean and look forward to catching up next year for Soundwave 2011!

Smith: Always a pleasure. I look forward to buying a blow-up doll. I collect them from different countries. One of the many true rumours floating around (laughs)

This entry was posted in Interviews, News. Bookmark the permalink.